After a superb and memorable day at Sherwood Forest led by the likes of Ted Green, Luke Steer, Reg Harris and Simon Richmond from the Arboricultural Association I came away with one particular quote from Luke firmly lodged in my brain. Nothing particularly technical or theoretical, just simply;

‘Every tree has its own individual story’

This may sound obvious or unremarkable given the rest of the knowledge that was imparted during the day, but in the context of the ancient oaks at Birklands in particular the Major oak this story can be almost infinitely complex. Taking a deep knowledge and understanding of trees and their behaviour in relation to their external influences to even begin to unravel their complex individual stories.

On our way to and back from the Major oak we were walked and talked through the main physiological features and biomechanics of a number of impressive veteran oak trees, all with their own unique management regime drawn up and overseen by Luke. All of the trees inevitably having its own story to tell.

One short and stout veteran oak tree had features typical of an open grown tree even though it was now part of a well established and almost closed canopy woodland, giving us living evidence of the lands gradual evolution from wood pasture to forest / woodland. The bark of the tree was covered in extensive burr formations giving rise to a theory from Luke that this could be playing a part in it having reduced foliage size and extension growth due to restriction of nutrient and water flow through its contorted vascular pathways. The fact that it had historically matured as a wood pasture tree but was now surrounded by other competing and faster growing trees, meant that part of the future management required to retain the tree would include halo pruning of the surrounding trees in order to reduce competition for sunlight.

Another of the superb veteran oaks had a largely dead top, with extensive hollowing from its base to the top of the stem. Again likely to have been historically a wood pasture tree, now becoming enclosed by predominantly young silver birch. The tree was however developing some promising and reasonably vigorous epicormic growth low on the main stem. Giving the tree the potential to begin creating its own ‘pension fund’ for a ‘happy retrenchment’ into its days of potentially ancient tree status. Again ‘haloing’ was being carried out to increase light levels reaching through to the low epicormic growth, and bracken was also being managed to control fire risk and to reduce its allelopathic properties within the rooting zone.

The next veteran had been fit with its own custom designed girdle to prevent it from splitting in two from ground level. Luke explained how this huge longitudinal split down the centre of the main stem was likely to have occurred during high winds, when the top was torn out of the tree and tensile stresses transverse to the grain of the tree caused a huge longitudinal split down through the stem. Even after such a violent tear out the tree was still responding with vigorous regrowth to the point that it was beginning to jeopardise its own future stability. So the decision was made to fit the girdles and to reduce the regrowth by a few metres to keep the tree in a stable condition.

Lessons have recently been learnt from the application of metal girdles on ancient tree stems. An arborist from Belgium stepped forward to recall how girdling of a champion Belgian oak had gone un-monitored and had led to a situation where the girdle itself had so severely compressed and restricted the cambium and flow of water and nutrients that the tree had recently entered a state of acute and irreversible decline. Leading the discussion onto new possibilities for the design of such girdles, one innovative solution being the installation of evenly spaced eye bolts around the stem, threaded with wire cable and then tensioned to stabilise and secure a severely split stem. This method would apply even pressure and compression on the stem around its circumference / cambium and would avoid such restriction. It would also allow for incremental loosening of the girdle through slackening of the cable.

Now on to the impressive Major oak, with its rich, complex and unique story; the crown now being tangled with a web of steel rods and wire bracing (some of which were installed as far back as 1908) and most horizontal structural limbs being supported to varying degrees by its many props (installed in 1985). It’s easy to see why this arboreal colossus was voted England’s favourite tree in 2014. Before this however the Major oak has been attracting visitors for at least two centuries and has outlived King John by around 800 years whose ruined palace lies at the nearby Clipstone. The Major oak has seen off the threat of two world wars, seen the rise and fall of the coal industry and now lies safely behind the ring of fencing erected in 1975 that protects it from its visitors climbing up or into its hollowed trunk as was previously common place. 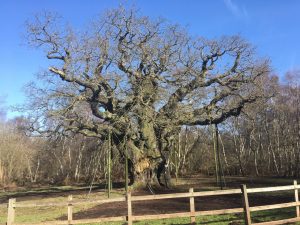 The main pressure for the Major oak prior to the erection of the protective fencing had become the compaction caused by the estimated 220,000 annual visitors at the time. This had become so extreme that die back had become evident in the trees upper crown. To put it simply the sandy soil had become so compact that rain water, nutrients and minerals could no longer readily percolate through the soil to the roots below. The perceived solution at the time was to apply a thick layer of woodchip/mulch which would in turn encourage earth worms and other soil dwelling invertebrates to re-enter the rooting zone of the tree, churn up the mulch and consolidated sandy soil allowing for the reinstatement of a healthy soil structure and with it the re-establishment of beneficial mycorrhizal fungi within the rooting zone and the increase of small fibrous feeder roots close to the soil surface. Unfortunately this result was not achieved. Instead the mulch broke down over time and began to take on a peat like structure with earth worms and other invertebrates restricting their activity to the mulch layer and not entering the still consolidated sandy soil below. With this distinct layering of the soil between the peat like mulch and the consolidated sandy soil, the water and nutrient flow between layers remained restricted. With no improvement in the development of fibrous root or increased mycorrhizal activity being achieved it has been decided to remove much of the mulch and begin testing for a suitable method for manual de-compaction of the sandy soil. This is likely to be carried out with hand tools as very little fibrous root is present close to the surface of the sandy layer. Any works carried out which alter the soil conditions within the trees rooting area will need to be carried out sensitively and will be done in incremental sections with results being closely monitored. 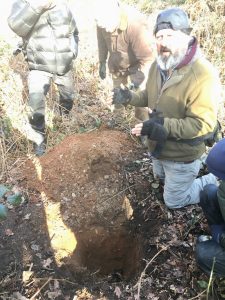 Inspecting a soil profile in nearby woodland to the Major oak

So, it is in the good hands of the experts that hosted us on this day and the next generation of veteran arboriculturists to continue contributing to the story of the Major oak and the many other veterans in Birklands. As arborists it is our daily duty and passion to continue to read and interpret the stories of the trees we have dealings with during our professional lives and careers, as we surely owe them this much.